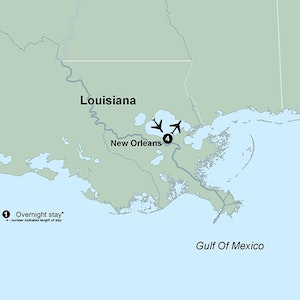 Step into “The Big Easy” - a soulful city abound with rich history and mouth-watering cuisine - all decked out for the holidays. Visit the 19th-century Hermann-Grima House to learn about Creole holiday traditions. Learn the secrets of the city’s famous French Quarter on a walking tour featuring St. Louis Cathedral and the French Marketplace. Discover its unique flavors during a holiday cooking class featuring popular dishes of the city. See trees draped in glistening lights on a train ride through the lit bridges, lagoons and gardens of Celebration in the Oaks. Enjoy lunch and a holiday-themed musical revue by the Victory Belles at the National World War II Museum. Head out to the swamp for a cruise tour of the bayous and learn about the history and ecology of this fascinating ecosystem. Celebrate the season like a local and toast your travel companions at a traditional reveillon dinner at The Court of Two Sisters in the French Quarter. Enjoy a single-hotel stay in the heart of New Orleans’ French Quarter amidst jazz, streetcars, and an unmistakable joie de vivre that can only be found in this lively city during the holidays.
Call to Book 1-800-222-7448
Get an Estimate View Dates Save for Later
Additional Information

Step into a cultural melting pot in the “Jazz Capital of the World,” New Orleans! Experience this soulful city in December, abound with rich history, mouth-watering Cajun and Creole cuisine, and of course, an incomparable soundtrack. The city sparkles even brighter with the pageantry of the season when it rolls out the red (and green) carpet!

This morning, visit the Hermann-Grima House for an old-fashioned Christmas and learn about Creole holiday traditions as you admire the home as it appeared in the 19th century. Afterwards, introduce yourself to the city’s famous French Quarter on a walking tour that features the majestic St. Louis Cathedral, one of the city’s most recognizable landmarks. Dressed in their holiday finery, these are some of the most impressive historic structures in the city. Head over to Café Du Monde for a taste of a true New Orleans favorite – beignets! Explore Pirates Alley and the bustling French Marketplace, where you’ll stand in awe of a 30-foot tree topped with a fleur-de-lis. Spend the afternoon strolling around the French Quarter and see the dazzling hotel lobbies and antique shops on Royal Street. Take advantage of some free time to explore more and use your included Uber voucher to return to the hotel. Tonight, learn how to cook for the holidays New Orleans-style! During a demonstration at the New Orleans School of Cooking, your chef reveals everything Louisiana cuisine offers. The magic continues at Celebration in the Oaks, a New Orleans tradition, with a train ride that takes you through lit bridges, lagoons and gardens.

Set out on a panoramic city tour with a local guide. Start by seeing the St. Louis Cemetery #3; opened in 1854, it holds some of the most elaborate crypts found in the city’s cemeteries. Relax during a drive along the shoreline of Lake Pontchartrain. This road eventually leads to St. Charles Avenue, whisking you past gorgeous mansions and two world-famous universities, Tulane and Loyola. Next, enjoy lunch and a holiday-themed musical revue by the Victory Belles at the National World War II Museum. Take a walk through history to learn about the American wartime experience.

Drive along New Orleans’ historic Esplanade Avenue. Then, journey through the Louisiana swamp on a cruise* narrated by your captain. Learn about the ecosystem’s history and ecology while keeping an eye out for wildlife, from bald eagles to herons, turtles, and alligators. Return to the city and enjoy the rest of your day at leisure to discover more of New Orleans your way. Tonight, celebrate the season like a local and toast your travel companions at a traditional reveillon dinner at The Court of Two Sisters in the French Quarter.

Your holiday tour of this captivating city comes to a close today.